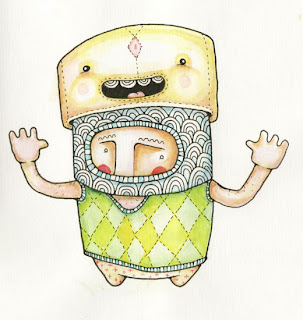 Ok so I'm 25 years old. I know it might sound silly but I worry sometimes that it's to late for me. That I'm to old to "make it" as an artist. That I won't have ever have huge success, that I won't leave my mark and that I'm doomed to be someone who tried and became nothing but satisfactory. Of coarse I don't know what success really looks like, is it when I don't have to worry about money? is it when I know a bunch of top end artists? is it when I have a show at a high end gallery? is it when I'm working for Nike? Maybe it's just an age thing, maybe it's just that I see that I won't be able to do everything I ever wanted to in life, I won't meet everyone I want or go to every place. There is not enough time, or enough of me, to do all the paintings and projects and parties and travel. I think I'll take a breath and just look at what I have, say thank you for it, and plan some good stuff for the future.
Posted by Basco Five at 6:17 PM